`## Note: In this review, I will only mention COVID-19 in passing. It continues to be a tough topic for me for a number of reasons obvious and non-obvious, that this post is not about. This is a triumph through trial story.`

2019, I toured Europe for the majority of the year — some in Amsterdam, a little in London. I, an optimistic and ambitious new consultant, decided my first year consulting full time should be taking advantage of the remoteness of my work with my 6 year old beagle in tow. 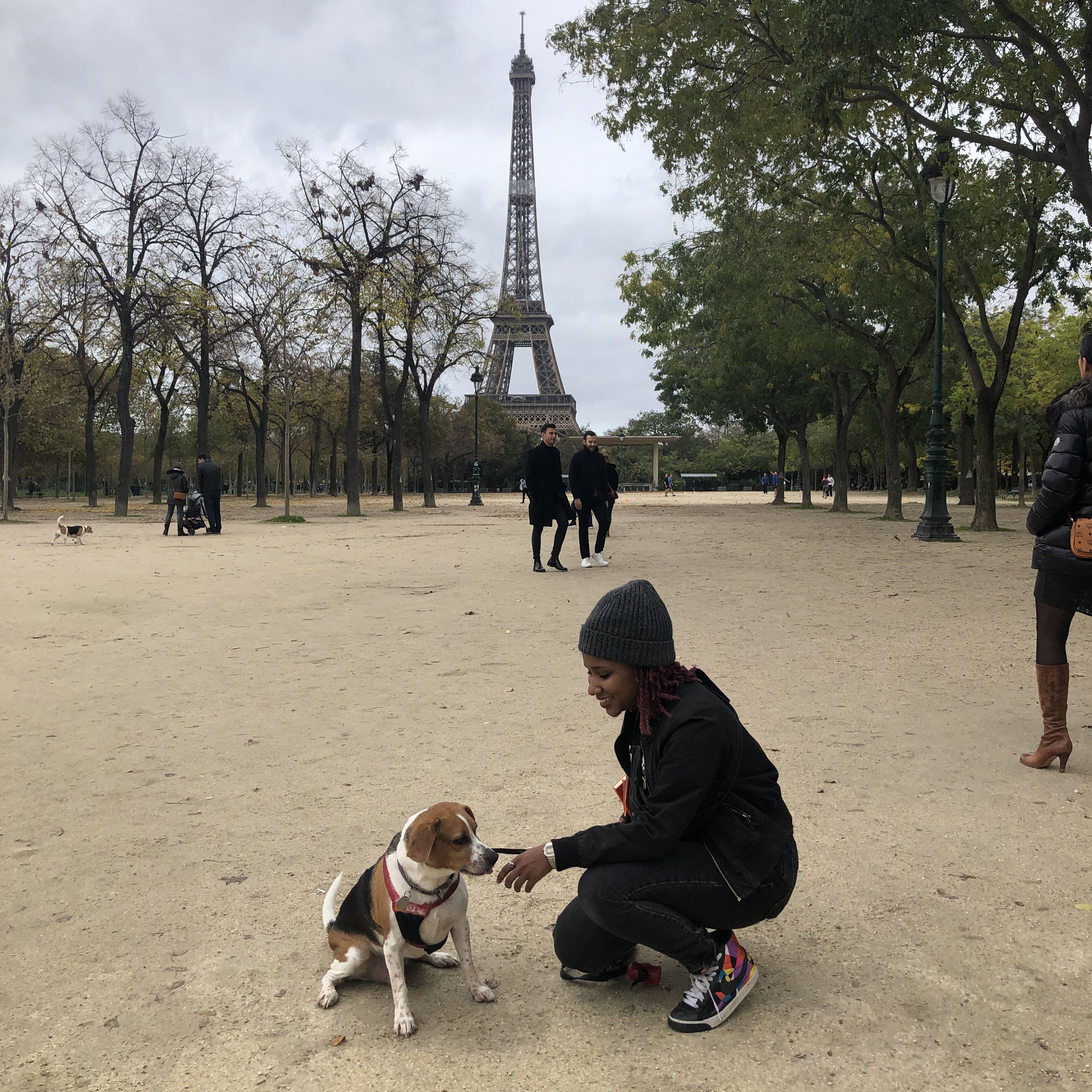 I’d be remiss to discuss 2019 or 2020 without discussing how my career has evolved along with my focus on my mental health. The move to Europe was a calculated one that began after a break up mid 2018, that should have broke my heart, but only broke my will. There were no tears, there was just this odd, empty end of interesting possibilities — insert obscure Steven Universe reference about Garnet’s future vision. I planned and planned and what was supposed to be Paris with my first big software engineer break, after teaching myself to code for the previous four years, but ended up betting on myself since no one else would take a chance on this black girl. I packed a bag, sold all my stuff and pursued a expat DAFT Visa in The Netherlands.

I leaned on my community...

I made an excellent bet and haven’t looked back. I went from living out of a few suitcases with my dog 2,000+ miles away from anyone I loved in 2019 to 2020: I’ve traded magical Euro cafés for my first dedicated home office (with a door!), a true community with a big brother, Tim Allen, a new interdisciplinary brain trust 🧠 of my favorite qpoc (we affectionately call ourselves The South Philly Queers on Wheels — we all head out on skatepark friend-dates with our boards and quad-skates); working with my sister Brooke Wages as a technical liaison for a TBA Black Entrepreneur Conference at MIT, and being just a month shy of an anniversary with a new team Two Rock Software, founded by two of the most encouraging and fun developers I’ve had the pleasure of working beside — Victor Rocha and Peter Grandstaff — it makes sense that I was introduced by one of the most straight-shooter, pragmatic, bright and KIND people I’ve met Erin Mullaney.

I kept in touch with good friends I made in Europe and should keep in better touch. Rin and Emanuel and the entire Django London meetup community are what calls me back to the UK. We have candid, empathetic talks about loving ourselves, loving our work, career goals, and making contributions to the Django community. Both are brilliant engineers who produce content! Check out Rin Klinkeviciute and Emanuil Tolev. I also gained a few “mentors” last year I’ve had trouble keeping up with, but my community remains strong and reaches out to me. Special shout out to Craig Labenz, who made huge moves recently and always remembers to periodically check in. A twitter mentor, turned friend, who will eventually get me to try Flutter!

When the going got tough, the tough got going... 💪🏾

A lot of you may have been first introduced to me through this not-so-viral tweet, that inspired a lot of action. From it I created Volunteer Engineers 4 The Movement, a collective of black tech professionals developing applications for “The Movement”. We organized around 20+ projects and leverage each other as a resource in teams and ideas on Discord. You may still join the server but please be patient. The flat, no hierarchical, decentralized structure allows it to be a community of self-motivated individuals rather than a movement propelled by ego.

June was a tough f*cking month. I was paralyzed. On top of the pandemic, the community I desperately missed and informed my move back to the United States, and Philly in particular, was having another reckoning. Tensions rose and people were dying. I saw videos of angry South Philly white men stomping through streets I recognized and I boarded up at home — telling me that my people, simply asking to not be murdered in the street, was an affront to them personally. I saw thousands, inspired and afraid and sad, coming forward with their trauma, hoping another anecdote will humanize the already well known statistics: at every level, at every interaction with the system we are confronted with racism both de facto and de jure. Black Trans Women have died at the highest recorded rates this year. In my heart, but also proven through data, I know this is a result of finally counting the humans that have their lives snuffed out AND addressing them by their CORRECT names and pronouns — the double dehumanizing damage. I’ll speak more about the work I’ve done helping my favorite abolitionist, pro-lgbtq and HIV+, and specifically black trans woman led organization: Black and Pink, below in the section titled Finally Launched 🚀 . In June, I cried most days; some days it was all day. I worked the lowest number of hours I ever had, while available work piled up — impacting me down the rest of the summer and early fall (yes, I am a working class dev). This deep pain, motivated to put into action my passion project: At The Root, the first antiracist license for open source code, named after a quote from the brilliant black, queer activist Angela Davis: “Radical simply means ‘grasping things at the root’”. To learn more about Ethical Source, or how to help contribute to the first version of the license, please visit our page. We are looking forward to our first release soon, pending partnership going public and a potential podcast episode with an amazing antiracist warrior in her own right. In addition to the Antiracist license there is the ATR Checklist, which provides specific ways that your project can be antiracist and is also open for PRs at any time! Please contribute.

Bottom line on top: With the partnership of Two Rock Software, we finally launched the Black and Pink PenPal Pairing App that I’ve wanted to get launched for two years. Imagine me, a baby queer in Kenan-Flagler Undergraduate Business School participating in the Out for Undergraduate Business Conference in 2012. I was fresh in my networking career, so I made more Facebook friends than I did professional contacts - but BOOYYY did I have fun in New York. Tanya Nguyen was one of those contacts and after posting about my Django journey for my cheering and friends and family online, she reached out to me about Black and Pink’s half done app built in Django and React. I had just finished a modern fullstack Node/JavaScript bootcamp — I never talk about my bootcamp experience for many reason that will show up in a blog post one day — while working full time as a project manager for Lenovo ecommerce and I had a brand new mentor Zan Anderle (now mentor and close friend), and I had been teaching myself Django and Python for about 3 years. The project scope was huge. I didn’t know where to start and I jumped both feet in to the messiest part of the code. It’s been a long way with prioritization and editing focus. We switched from ActBlue to EveryAction CRM, changed the front end, adjusted requirements for volunteer and admin tools and even launched a Holiday Card Feature in response to COVID-19! I’m incredibly honored to work with a Black Trans Woman run non profit with a long legacy of doing the work.

Working with Wagtail and a Few Conference Talks

I spent my first full year on the Wagtail Core Team! I’m honored to work along side the brilliant engineers on our core calls, thinking about the future of a widely used, Django CMS Wagtail. I’ve been learning Wagtail since 2017 when I met Tom Dyson in Spokane at DjangoCon. The following year I spoke at Wagtail Space in Philly, last summer I attended Wagtail Space Arnhem and this summer I gave two conference talks one at Wagtail Space 2020 and the other at Pycon Australia about marrying Gatsby and Wagtail for rapid development with an excellent client features out of the box (both boxes)! With a little glue and duct tape I got both frameworks: Gatsby and Wagtail (more opinionated and specific off shoots of React and Django respectively); to work nicely with eachother. There are some issues that are a little counter intuitive, for example: having the graphql datastore with the power of the Django ORM feels like having a car with two engines.

There are some patterns that I would love to lean into and will require a little more love. Things like leaning on the way that Wagtail sets up their pages, hierarchical and data for their pages could work well with the way Gatsby queries for page level information — how do we make this more simple? I just got into Wagtail experiments and even made some local changes to the project to meet the needs of a client this year. Could we use the progressive front end of Gatsby with Wagtail experiments?

There is already React inside of Wagtail, the team has nicely obscured some of that complexity with magic. I hope to move forward with more headless Wagtail tools, and specifically work with playing in the JavaScript for Python Engineers space — thankfully my good friend Žan Anderle is developing resources for us!

So much has happened this year, much of it has come and been inspired by the rapid development that Gatsby and Wagtail give me. At The Root, Volunteer Engineers 4 The Movement and my blog are all built in Gatsby. I’m a full stack consultant, not a designer and I feel empowered with the many plugins Gatsby offers in order to upgrade your front end.

I’ve already written a little bit about Wagtail and Gatsby, but I plan on publishing much more. Although my experiment with the two together, worked pretty well, my priority is to the Wagtail community and I’ll also be reviewing PRs and getting more active in the resource channels. If you see my name, say hello! I’m pretty friendly.

Get in loser, me and all my friends are... PRIORITIZING ACCESSIBILITY! January 2020, I was sad to not be able to make the accessibility sprints with the Wagtail team. It has been full circle to be able to consult with Bocoup on an ARIA Assistive Technology project. I just started contributing, but I’m learning so much. I am insistent that my future projects will be required to meet accessibility standards.

I’m thinking of ways to hold myself accountable, find tools and certifications that make me a better a11y ally. It is an honor to work on a project that aims to help revolutionize the way assistive technology could interact with the web and inform the way the web is created to suit assistive technology.

More to come in this space but it is easy to keep an accessible front end with Gatsby. It’s HIGHLY opinionated a11y plugin won’t allow me deploy until certain attributes are fixed. Perhaps there are more ways we can apply this technique.

- I’ve been studying Systems Architecture and bought a few books!

- Stop calling your depression a “migraine” — it’s not that and you want to work on teams that understand you’re a human who codes.

- Lots and lots of Django development

- It’s been 2018 since I’ve reviewed modern ECMAScript. I’m looking forward to having projects that will let me apply the bleeding edge ECMAScript.

- Speak at more conferences, I'm creating a talk for At The Root and Wagtail + Gatsby